skip to main | skip to sidebar

'Summertime tagliarini': perhaps not the dish you would expect me to make near the end of November. I have noticed that quite a few of the recipes in the book are implicitly summery, less perhaps in name than in the ingredients that they include (broad beans, asparagus, and so on). I confess that I have a bit of a thing about eating seasonally; I am also prepared to admit that this is a relatively recent concern of mine, and more, that until a few years ago I honestly couldn't have told you what was in season when. I was and still am in some ways a child of the supermarket era; I can still think of nothing nicer than a huge French hypermarket, but I probably equally spend more time in Tesco than most and I see a trip to Sainsburys as a treat. Nigel Slater would be horrified; Hugh F-W would punish me with a trip to his farm and the sight of slaughtered animals, and Joanna Blythman would give up on me in disgust. In my defence, I have the same reaction to all shops, with the exception of those tedious DIY places where men can inexplicably loiter interminably, and which don't even have a decent in-store magazine. I like shopping and I hate dirty fields, and people always try and make out that makes me a worse person - as though your morality is directly related to how much time you spend in mud. I would be prepared to accept that supermarkets are evil empires of economic fascism, that they exploit farmers and small producers and damage the environment, and I buy vegetables and meat from a local farm shop but I still go to the supermarket because let's face it everyone does - and because I am a possible shopaholic. I try to make a difference to how I shop though, and one way is refusing to be unseasonal as far as possible, so thus far I haven't decided what to do about the recipes with unseasonal ingredients. Watch this space.

Long preamble over, this recipe had no unseasonal ingredients and could easily be eaten in November (in my opinion). It is basically pasta with pesto, but the pesto is made with parsley rather than basil and is also more textured because only half of the pine nuts are ground up. It is as easy as pesto: smash up half your pinenuts and put in a bowl with parmesan, pecorino, the remainder of the pine nuts, chopped parsley, lemon zest and juice. Season.

Put a large pot of salted water on to boil for the pasta. Sit the sauce bowl on top of the pan while the water heats up to warm the sauce slightly. When the water boils, remove the bowl and add the pasta to the water. Cook as usual, reserving a little cooking water, then toss the pasta with the sauce; if it is too claggy, add some cooking water (I added a bit). Serve with shaved Parmesan and parsley leaves. 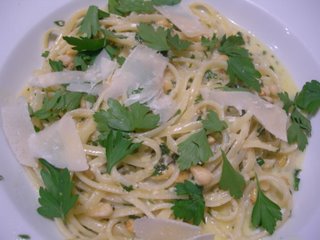 This was a nice, clean-tasting dish, which in retrospect is pretty summery, although it was still good in November. I liked the creamy texture of the sauce - I think I will try the old faithful of pasta with basil pesto this way next time. It was an easy weekday meal - easy and tasty, and nice to eat too; not something I would rave about, but I would definitely make it again for a good weeknight supper, and I am determined to try a basil version. I have to say that pasta and pesto usually bores me (I think I overdosed on it at university); I love pesto, but not plain with pasta. This way, with pine nuts whole as well as bashed up into the sauce, is much more interesting to look at as well as eat - and all made with store-cupboard ingredients, so I didn't have to make a special supermarket visit and don't have to feel guilty. Result!

Bold statement re supermarkets, honey bun. I too have little interest in defending my buying decisions or where I choose to spend my money. It's quite an ideal image to be able to get fresh eggs from one's neighbor and see your Thanksgiving turkey merrily strolling before it meets its end. But, I don't like in Tuscany or the English countryside. I live in an urban jungle, so I try to make the best decisions I can with no judgements, please. :))

I do feel that the people in the UK are a bit more judgemental of their fellow citizens. I hope this doesn't happen in the U.S. I am disgruntled enough, LOL.

I know what you mean about pesto.. not too excited by it either. Even with all the variations, I think I prefer spaghetti with red sauce. ;)

spelling mistake: I don't LIVE in Italy. I do LIKE Italy quite a lot! LOL.

Hi Kathryn,
Nice article about organic vs supermarkets. I think there are certain things you can do to keep you conscience clear when shopping and that's always buy organic meat and eggs. As for vegetables, I try to buy along the roadside where I can. I response to Ilana's statement, supermarkets do try and do their bit for organic stuff, albeit at a higher price but it is worth it if, at the end of the day, an animal doesn't suffer and that is the sole reason I buy organic meat and eggs. In fact, in America meat is far more organic than it is over here in sunny England because those lucky Americans have far more space to let cows wander around and graze peacefully.

Alas while you can now source (with difficulty) organic, humanely raised meat in Canada and the US, it is almost impossible to have that meat humanely slaughtered. In Canada, all meat must pass through a state supervised slaughterhouse, and they are not pretty places. And most commercial beef is raised very inhumanely, in large, crowded feedlots necessitating the use of medicated and hormone supplemented feeds. The old days of range fed beef have largely passed into myth.